This recipe was adapted from Doughnuts by Lara Ferroni. The original recipe calls for 300-440g of flour, but the dough was still too sticky, so I continued to add flour until it was nice and smooth. I ended up adding around 100g of flour more, so I adjusted to flour quantity in the recipe to 550g. You might need a bit less or a bit more in the end. Just add the flour slowly until you get a nice dough that doesn't stick to your hands. 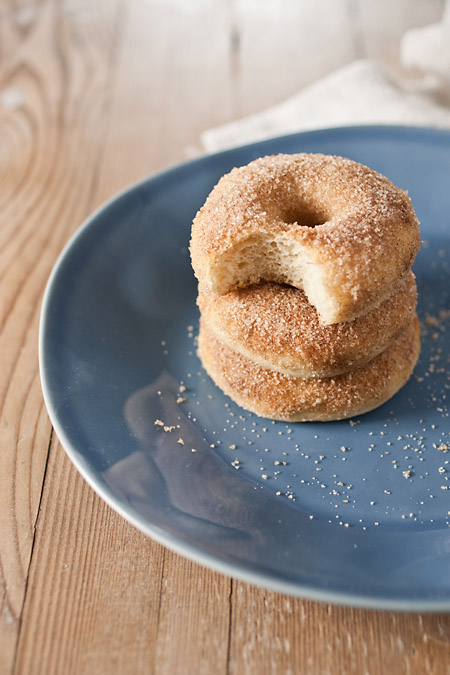 For the cinnamon-sugar coating:

In your standing mixer bowl with a paddle attachment, beat the egg, sugar, and vanilla sugar for 1 minute. Mix in milk, yeast, and vanilla extract. Add half of the flour and mix on medium speed until well incorporated. Now add butter, one cube at a time, and mix until smooth. Remove paddle attachment and attach the dough hook. Add cinnamon and slowly start adding the rest of the flour while mixing at a low speed. Stop adding flour when the dough sticks to the hook and pulls away from the sides of the bowl. It should be soft and moist but not sticky. You will probably need between 500g and 550g or even a bit more. Adjust the amount if necessary. Turn the dough out onto a lightly floured surface and knead until smooth. Place in a mixing bowl coated with cooking spray and cover with plastic wrap. Let rise until doubled in volume, about 1 hour. Punch down the dough and roll it out to about 1cm thickness. With biscuit cutters, cut out 8cm circles and transfer them to a baking sheet lined with parchment paper. With a 3cm biscuit cutter, cut out holes from the middle. At this point, you can refrigerate the doughnuts overnight. Take them out an hour before baking and leave them in a warm place to rise. If you're baking them the same day, cover the doughnuts with a kitchen towel and let them sit on top of the preheating oven until almost doubled in size, about 30 minutes. Preheat the oven to 180° C. Bake the doughnuts for 10 minutes. Leave them to cool for 2-3 minutes. In the meantime, combine sugar and cinnamon in a shallow dish. Brush the top of each doughnut with melted butter using a pastry brush, and dip into a sugar-cinnamon mixture. They are best eaten warm.