Although this might seem like a very complicated and intricate recipe, it is, in fact, fairly simple. Both the filling and frosting are done in 10 minutes, just by combining a couple of ingredients in a bowl and mixing them well. The cake itself takes the longest time to bake and cool, and the rest is done in a flash. 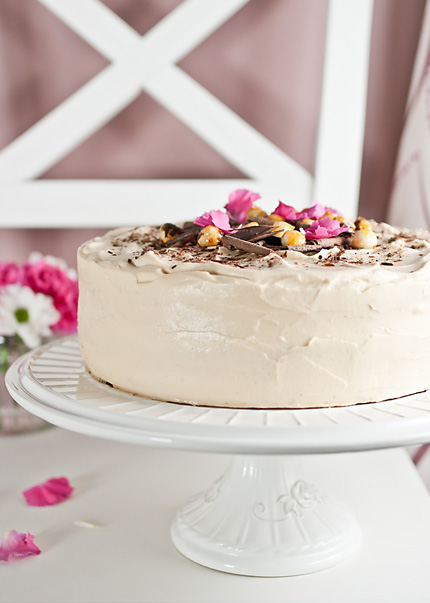 To moisten the cake:

Preheat the oven to 180°C. Line the bottom of a 24cm springform tin with parchment paper. Butter the sides of the tin. Combine flour, cocoa powder, baking powder, and salt in a bowl. Mix to incorporate and set aside. In a bowl of your electric mixer, beat together egg yolks and sugar until light and frothy. Add vanilla, melted butter and chocolate, milk, and boiling water and mix until combined. Sift in the flour mixture and beat until incorporated. In a separate bowl, mix the egg whites until firm peaks form. Gently fold them into the egg yolk mixture. Transfer the cake batter into the prepared tin. Bake for 40 minutes. Cool to room temperature and cut the cake horizontally into three equal pieces.

For the chocolate & banana cream filling:

In a bowl, combine banana puree, rum, and melted chocolate and whisk to combine. Add heavy cream and beat on high speed until soft peaks form.

For the caramel frosting:

In a bowl, combine cream cheese and caramel sauce and beat until creamy and well incorporated. In a separate bowl, whisk heavy cream until soft peaks form. Fold the heavy cream into a caramel mixture.

For the caramel sauce:

In a heavy-bottomed saucepan, combine sugar and water. Cook on medium-high heat until the sugar melts and reaches amber color. Do not stir during that process. Remove from heat and stir in the butter. Pour in the heavy cream and stir to combine. Transfer to a small bowl and cool to room temperature. As it cools, the sauce will thicken.

Place the bottom cake layer on a platter and moisten it with a mixture of milk and rum. Spread half of the chocolate and banana filling. Top with a second cake layer and moisten with some milk. Spread the rest of the chocolate and banana filling over it and top with the last cake layer. Cover the whole cake with caramel frosting. Refrigerate the cake for at least two hours before serving.